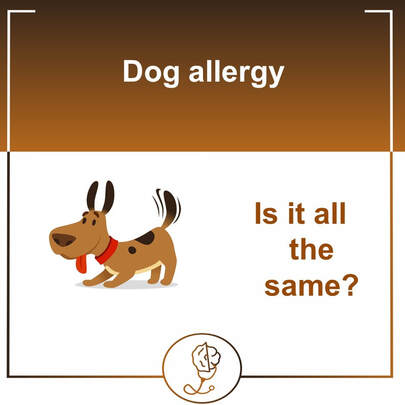 What if you have allergic reactions when near some dogs but not others?⁣
⁣
Considering there are NO 𝐡𝐲𝐩𝐨𝐚𝐥𝐥𝐞𝐫𝐠𝐞𝐧𝐢𝐜 𝐩𝐞𝐭𝐬, then the answer must be somewhere else.⁣
⁣
Have you thought you might be reacting to a male dog and not a female dog?⁣
⁣
Although a male specific protein was discovered in 2008 by researchers in 𝐒𝐰𝐞𝐝𝐞𝐧, the test to make this diagnosis only became available in 2020.⁣
⁣
This male dog specific protein is found in the dog’s prostate. Hence females will not produce it.⁣
⁣
It is called “𝘱𝘳𝘰𝘴𝘵𝘢𝘵𝘪𝘤 𝘬𝘢𝘭𝘭𝘪𝘬𝘳𝘦𝘪𝘯”, or 𝘊𝘢𝘯 𝘧 𝟻, and it is actually similar to a human male prostatic protein involved in vaginal allergic reactions.⁣
⁣
Saying this, we also know that a male dog can produce the primary dog allergen, called 𝘊𝘢𝘯 𝘧 𝟷, which is found in saliva, roughly 𝐞𝐢𝐠𝐡𝐭 𝐭𝐢𝐦𝐞𝐬 more than a female dog.⁣
⁣
Understanding that allergic reactions are dose dependent can explain that someone might react to a male dog, mainly due to higher allergen exposure.⁣
⁣
This can also explain why someone can have a reaction when in the same room as an animal owner (𝐍𝐎𝐓 𝐉𝐔𝐒𝐓 𝐃𝐎𝐆𝐒), as the main mammalian allergen belongs to a group called “𝘭𝘪𝘱𝘰𝘤𝘢𝘭𝘪𝘯𝘴”.⁣
⁣
These tiny allergens spread easily and adhere mainly to textiles but also can remain suspended in the air for long periods of time, making them easy to be transferred from one person to another.⁣
⁣
If you are in doubt about being allergic to a dog or not, start by requesting 𝐬𝐤𝐢𝐧 𝐩𝐫𝐢𝐜𝐤 𝐭𝐞𝐬𝐭𝐬.⁣
⁣
In case the result is positive, and you believe you have allergic reactions when near a male dog only, you can request component diagnostics to dog allergens, focusing on 𝘊𝘢𝘯 𝘧 𝟻. 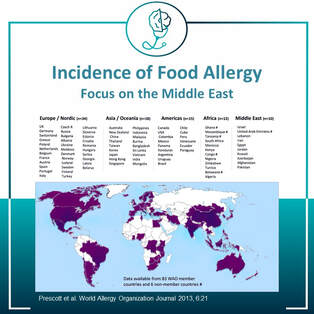