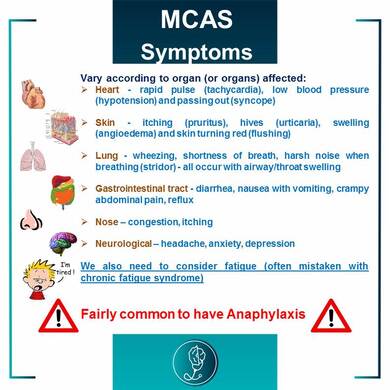 𝘔𝘢𝘴𝘵 𝘤𝘦𝘭𝘭𝘴 are an important part of our immune system, and we could not survive without them.⁣

It is thought the way this line of cells has evolved was mainly to fight against invasion and proliferation of 𝘱𝘢𝘳𝘢𝘴𝘪𝘵𝘦𝘴 in the human gut.⁣

Now it works as the main mediator for allergic diseases but also to fight infections.⁣

Only recently (around 𝟐𝟎𝟎𝟕) it has been named a known disorder and, due to that, its incidence and other epidemiological information are really not known.⁣

As a rough idea Mastocytosis (another Mast Cell disorder) is thought to affect between 𝟓 𝐭𝐨 𝟏𝟎 cases per 1 million world population per year.⁣

As 𝘔𝘢𝘴𝘵𝘰𝘤𝘺𝘵𝘰𝘴𝘪𝘴 is more common than 𝘔𝘊𝘈𝘚, we can only imagine how many cases are diagnosed worldwide per year.⁣ The rest of the data might be comparable, but it is not truly known.⁣

Treatment is focused on a decrease of symptoms and trying to prevent as many 𝘈𝘯𝘢𝘱𝘩𝘺𝘭𝘢𝘤𝘵𝘪𝘤 episodes as possible.⁣

So, if you believe your child, or someone you know, fits into the signs and symptoms I speak about here, please do ask for a referral to either a 𝐏𝐚𝐞𝐝𝐢𝐚𝐭𝐫𝐢𝐜 𝐀𝐥𝐥𝐞𝐫𝐠𝐢𝐬𝐭 or an 𝐀𝐝𝐮𝐥𝐭 𝐀𝐥𝐥𝐞𝐫𝐠𝐢𝐬𝐭.